Lawful characters see the world as a place of order and systematic structure. They’re likely to believe that “things happen for a reason” and take comfort in the security of a monarchic line, even if they are disgusted with the current monarch. They’re capable of imagining a force—like a deity, though not necessarily that—which organizes the universe, decides how history ought to unfold, and is attentive to what is going on on the planet. They take comfort in “scientific” models of reality, and while they may believe in magic, they see it as another system of order and logic underlying the apparent chaos of the world, one that can be known, understood, and used to bring the world back into balance. Likewise, those Lawful characters who are religious believe deeply in the sacred order of the universe as laid out in the cosmology of their faith. Clerics (those few who exist in the world) are usually Lawful.

Neutral characters tend to have a flexible worldview: they see ideas like “purpose” and “meaning” as provisional, and are noncommittal as to whether the universe is fundamentally ordered and meaningful, or chaotic and meaningless. They are able to see and acknowledge the arguments for both, but tend to resist (and in fact are temperamentally uncomfortable with) siding with one or the other viewpoint, even in the face of strong evidence for one or the other position. Order and Chaos, for them are inextricably intertwined, and one cannot hav one without the other.

All of this said, I’m not really a huge fan of alignment being used in game terms to award or punish characters or players. I think of it more as a tool for thinking about your character’s fundamental outlook and personality. Alignment changes interest me less than the struggle your character faces in holding true to her or his principles, and the difficulties faced in adapting worldview to match experience. 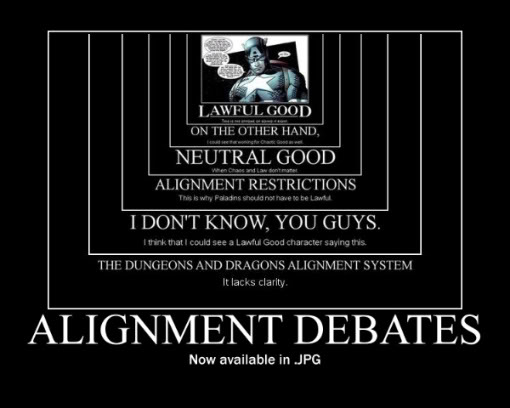