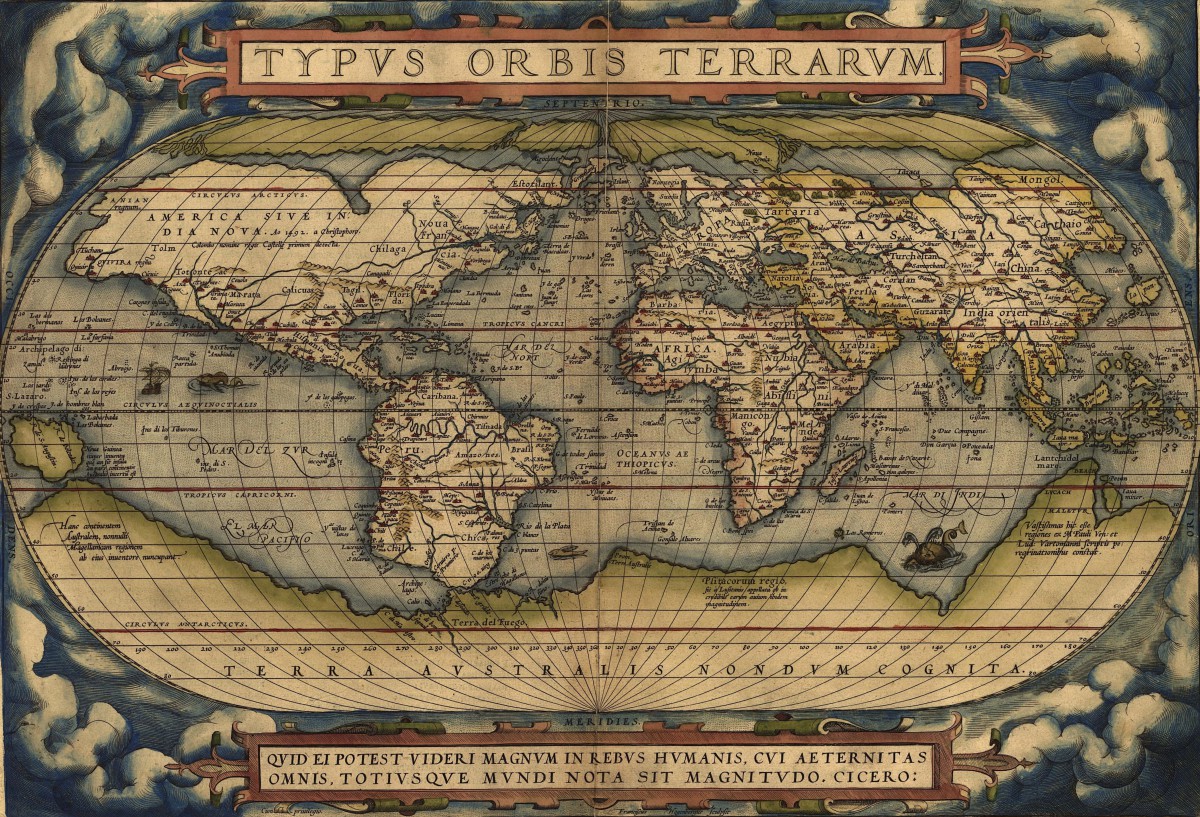 The Age of Sails and its fast ships began long ago, and much of the world has been explored, albeit very incompletely. It is the first age of what we now call globalization, and it is wholly practicable that at least one or two individuals from any background could be found in almost any other locale on the face of the world. (And, after all, in a world with magic, there are plnty of ways for someone to end up in a distant part of the world without any apparent reason for being there, or apparent means of getting there.) But as for common knowledge: European and Arab traders have vast networks spanning Eurasia, and information, though it flows slowly, nonetheless flows in all directions. It’s a long time since Marco Polo was mocked for his stories of the lands to the East of Europe: now, such tales are followed avidly, and especially by adventurers looking for someplace to risk death and worse in the name of self-enrichment, glory, and (occasionally) gainful employment.

As for the state of global affairs as they currently stand:

European expansion into the American continent is well underway. In the Northern Hemisphere, French explorers have mapped the rivers, and conflict over bother territory and conrol of the fur trade has been increasing in recent years, with the French and the English—and their various allies among the aboriginal peoples of the continent—has grown to the point where the battle lines are drawn and low-level conflict is constant, except when enemies must band together to fight off the occasional bigger threat from the wilds. In the South, the jungles crawl with European explorers combing the layered ruins of multiple lost civilizations, searching for El Dorado, the Fountain of Youth, and adventure in general.

The nearby isles of the Caribbean, at present split between the French, the Dutch, the English, and the Spanish, are home to many plantations, but a number of smaller isles in the region remain somewhat unexplored, home to curious surprises: tales of uninhabited islands sporting large, ancient-looking temples, or islands that drift back and forth like ships upon the sea, have filtered back to the bewildered ears of Europeans.

Likewise, the coast of Africa has been mapped (in some parts, rather poorly), but precious little progress has been made inland. North Africa, now under Ottoman rule, is at least familiar from ancient history—the rivalry between Carthage and Rome, the medical writings of Ibn al-Jazzār (known in Europe as Algizar) that shaped Medieval European medicine, and Biblical references to Libya. But of the rest of Africa, little is known in Europe beyond that slaves can be gotten there. Traders return with stories of much greater strangeness—of secret societies that riddle a vast continent home to ancient, powerful kingdoms with cities build of bricks of gold, of cultures where witchcraft is openly practiced and fierce warriors call spirits into their bodies before charging into battles against the European invaders they seek to repel from their lands. Many Europeans are skeptical of such tales, but nobody knows for sure how much of this is mere rumor, how much second-hand exaggeration, how much fantasy or imaginings induced by the fevers that visitors inevitably contract visiting the African continent.

In the region knows as Hindustan, the Dutch East India Company has made some progress in establishing an area under colonial control, though the locals—ruled by myriad regional princes and lords—have put up a great deal of resistance. Spellcasters who have visited the region claim that the mages of Hindustan have worked out a wholly different system of magic-working, unlike the one used by mages in Europe, and a few claim to have learned some of their secrets. Notably, in the past few months, news of very strange occurrences in some Southern region of India—of villages thrown into chaos, of great tumult, of Dutch settlers and traders fleeing in terror—have all filtered back to the West.

Rumors of a great dynastic war taking place in China have spread through the rest of the world, though details—beyond rumors borne home by Protuguese traders of the appearance of supernatural creatures heralding a new dynasty on the rise—are few and far between. Further East, a report by a shipwrecked sailor named Hamel has been published, recounting adventures of thirteen years as a prisoner in a land called Joseon, which lay beneath the vast shadow of terrifying spirits dwelling in the guts of mountains… and of a war between its inhabitants and those of the islands further to the East, known to the world as Japan.

From the lands to the south of great China, bands of adventurers who call themselves “Varangians” have also returned to the West—occasionally bringing the odd refugee or foreign fellow-in-arms—speaking of a terrible, devastating magical war that has torn apart a once-rich, now-ruined region called “Sajavedra”; these adventurers, more often than not, have returned bearing treasures stunning to behold, but also stricken by a horrendous sickness that no medicine seems to permanently cure.

Closer to home, those who have visited the Balkans speak of a land in decay, torn apart by a great, incomprehensible conflict between terrifying, perplexing night-beings that none can explain, beyond repeating the name for the conflict that they have heard—inevitably, third-hand: the Slow War.

To the southeast, the slowly-declining Ottoman Empire—previously troubled by internal revolts and power struggles, has since its the defeat at the Battle of Vienna attained a sort of curious peace which none can explain.Trade has not slowed, though Ottoman merchants who were previously talkative and open about events in their homeland have grown increasingly tight-lipped. (Word has it that among Russian forces at the border, a surprising number of troops inexplicably have defected to the Ottomans, not as soldiers or mercenaries but rather simply abandoning their posts and disappearing into the empire’s lands, never to be heard from again.)

Russia, however, is otherwise occupied: over the Urals, there are rumors of a strange and unholy shadow empire growing that is ruled by beings residing in the depths of strange ruins discovered both out on the icy steppe, and in those lands in the region we now call Central Asia. In both regions live uncountable former vassals of the Russian tsar—numberless peasants of the wilds who, depending on who tells the story, either stand poised to break free of the rule of the Russian Tsar, or are desperate to flee the bonds of their monstrous masters and escape into the surrounding lands.

Finally, new and bewildering reports have been filtering in of lands newly discovered, in places where maps claimed only open ocean lay. One, a great southern continent to the Southeast of the Dutch East Indies, has been confirmed as real, and its coastline partially mapped; it is a land that has been dubbed Australia, populated only by a small number of very hardy people living in extremely difficult conditions, surrounded by unimaginably poisonous animals and natural dangers, in the face of which their continued survival borders on the inexplicable. (Some whisper that they live, and die, by strange magics unlike those known to the rest of the world.)

But other explorers’ reports are still more bewildering: islands populated by human-like (but clearly not quite human) beings, cities floating upon clouds above the sea, or rising up from the bottom of the ocean, realms ruled by animals or birds, rocks in the middle of the ocean from spring which towers housing vast, labyrinthine (one could say, Borgesian) libraries and prisons that extend as far as the eye can see upward into the sky, or downward into the earth. Such places seem to be stumbled upon once or twice at most, and those who explore them invariably return with no more of a map than a mere sketch, telling wild stories which they swear are the absolute truth. Yet many such places have not been discovered, and seem not to be where the travelers claimed.

So while the world does not quite match the map of our world, and it is a truly dark and dangerous place, it is also a world ripe for the exploration of those brave, foolish souls who dare to go forth and seek their fortunes abroad… that is, adventurers.