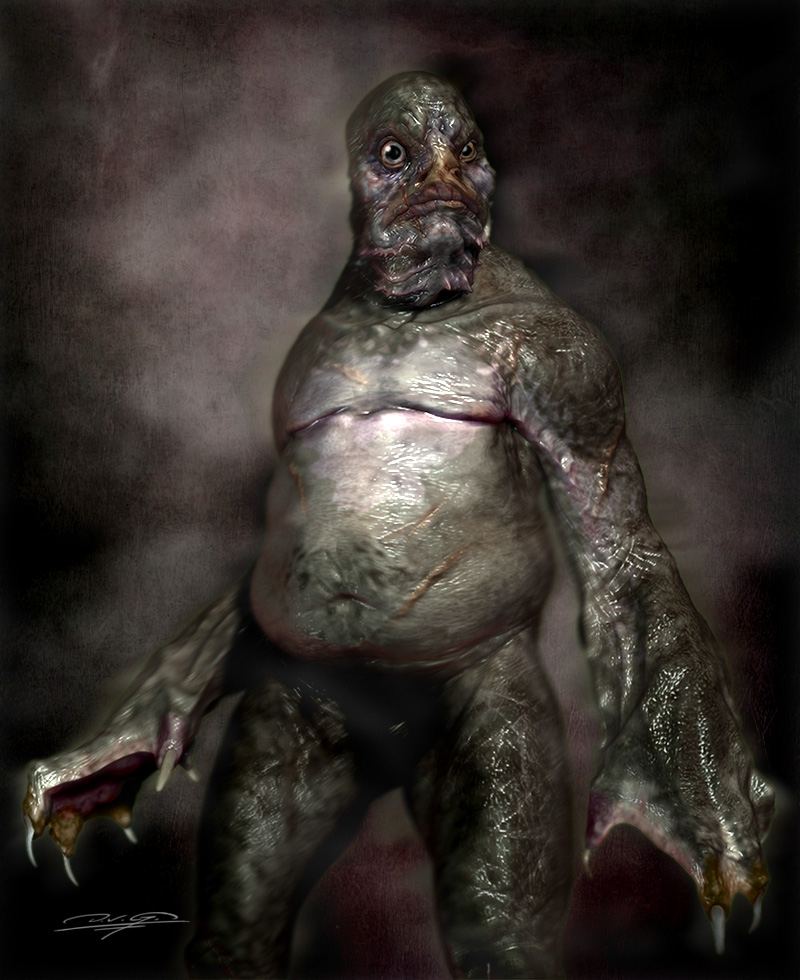 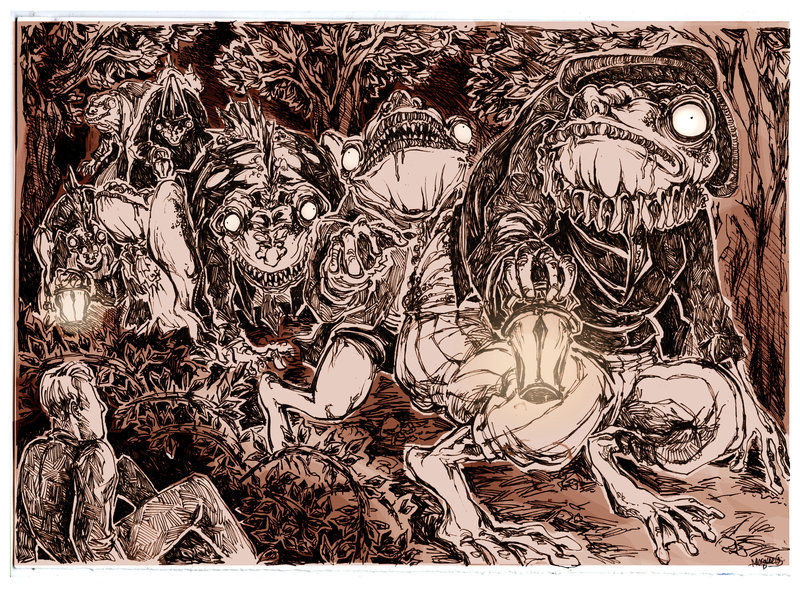 Because they are so far down the line of ancestry, Dagonians are generally human in appearance, until early adulthood. (In fact, a small number of Dagonians manifest their nonhuman traits earlier, but they are normally thrown into the ocean and drown or undergo their Metamorphosis (see below) and merge with Deep One society. (These latter group are not available as a PC race.)

Dagonians have several special abilities, but also several specific liabilities, which are specifically linked; the traits change according to how much the player character uses her Dagonian abilities. The player can choose, at the time of character creation, whether the Dagonian is aware that she or he is anything other than human, as long as the character is under the age of 25. (By that point, due to the simple harshness of life in the game world, most Dagonians will have learned the truth.)

In our campaign, race does not function as class. A Dagonian is equivalent to a human, and has almost all the same class options: they can be members of any of the main character classes: Magic-User, Specialist, or Fighter—or, very rarely, a Cleric. A Dagonian cannot also be an Alice, Revenant, or a Changeling.

However, regardless of Dagonian’s class, she rolls Saving Throws as Dwarf of equivalent level (see the Rules & Magic book for the chart).

Each Dagonian starts out with at least one Inhuman Trait from the table below, rolled up randomly. Roll a d6 and, for every level of the character above 1st level, add +1 to the roll. (For example, a fifth level character gains a +4 to the roll.)

Bear in mind, in the superstitious world of the Early Modern Era, people exhibiting such traits would face grave danger from superstitious countryfolk. Pitchforks and torches await any who wander about with such traits openly on display, though there are small villages here and there where such traits are more common in “certain families.”

Therefore, for each Inhuman trait the character gains, apply a loss of 1 point of Charisma when dealing with anyone other that fellow Dagonians (or Deep Ones); when dealing with these latter folk, the Dagonian enjoys an effective +1 point of Charisma per Inhuman Trait (calculated from the base score, to a maximum of 18). Note that these provisional alterations can change if and when a given trait subsides. (See Transformation, below.) 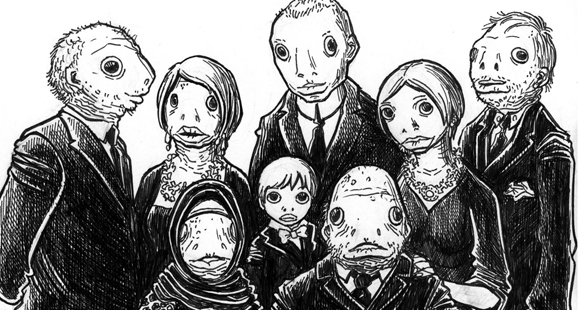 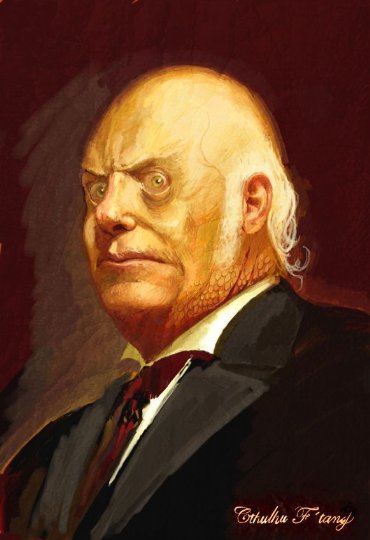 Gifts of the Deeps:

Each Dagonian also has at least one Gift from the Deeps, chosen by the player (for the first Gift) or rolled randomly (for all subsequent Gifts):

Most Dagonians grow up unaware of their traits, living in seaside communities. Those who do discover them, often do so in traumatic circumstances: for example, falling into the ocean from a fishing boat during a terrible storm that has claimed everyone else on board, or during a flood. Many a Dagonian has been shocked to discover that she or he can breathe water… and then even more shocked to discover the physical changes that followed this discovery.

The more a Dagonian refrains from using his or her racial abilities, the fewer Inhuman Traits she or he will display. However, the more they are used, the more Inhuman Traits will develop. In game terms, the player must roll a Saving Throw vs. Magic each time use is made of a Dagonian Gift of the Deeps (or, until she is 2nd level, any Basic Racial Ability). Failure means the character accrues one more Inhuman Trait that will manifest over the next 1d4 nights of sleep.

For each Inhuman Trait acquired, a Dagonian will also gain a randomly determined Gift of the Sea the next time she goes up a level, at a rate of one per level. (That is. Inhuman Traits can be acquired quickly, whereas Gifts of the Sea accumulate more slowly.)

The Call of the Depths

Once a Dagonian has too many Inhuman Traits to easily pass for human (typically 5 or more), she is also typically filled with intense longing to “return” to the sea, where she knows a city of those like her dwell. She may choose not to go there, but will be unable to completely ignore the sense of longing.

A Dagonian who succumbs to the Call of the Depths may return to play—usually a level higher, and with at least one more Inhuman Trait than before (and no more than two), but, if she or he has spent a month or more in one of the underwater cities of the Deep Ones, will emerge having gained 1-3 points of Wisdom and lost 1-3 points of Charisma.

There are Dagonian villages found all over the world, always small and remote, and always with a population doing its level best (and, ultimately, miserably failing) to blend in and go unnoticed.

Given that passing for human is the normal modus operandus for Dagonians, they do not learn the Deep One language until after having succumbed to the Call of the Depths; rather, they tend to speak the language of the surrounding culture, albeit usually in an awkward, stilted fashion.

Above a certain age (usually, in their late twenties or early thirties, when their Inhuman Traits begin to become too apparent to ignore), Dagonians are initiated into the secret of their bloodline, and taught that they shall be reunited with their “true” ancestors, the Deep Ones, when they have grown old and powerful enough to withstand the journey to the bottom of the sea. Most Dagonians simply accept this fact, and eke out a living as fisherfolk, duly waiting until they will become inhuman enough to set out on their voyage toward the promised land that lies in the dark depths of the ocean.

Even among those Dagonians who reject this fate—as almost all Dagonians who take to a life of adventuring do—there is often a hint of fatalism, as if one’s fate really is ultimately beyond one’s own control. After all, nobody asks to be born with monstrous blood running through one’s veins. But most Dagonians who flee the life-plan foisted upon them by their circumstances also have a sense that they can, perhaps, achieve some degree of freedom—if not glory and fame, or power, or pleasure, or perform real good in the world—along the way.

For this reason, while many Dagonians are of Chaotic alignment, PC Dagonians can choose whatever alignment they wish.

Oh, one more thing: a Dagonian can easily spot the tell-tale signs of an incipient Dagonian, but they don’t have any magical power that allows them to automatically sense one. If a given Dagonian has somehow managed to cause all of his or her Dagonian traits recede, then she will be indistinguishable from a normal human being, even to other Dagonians. 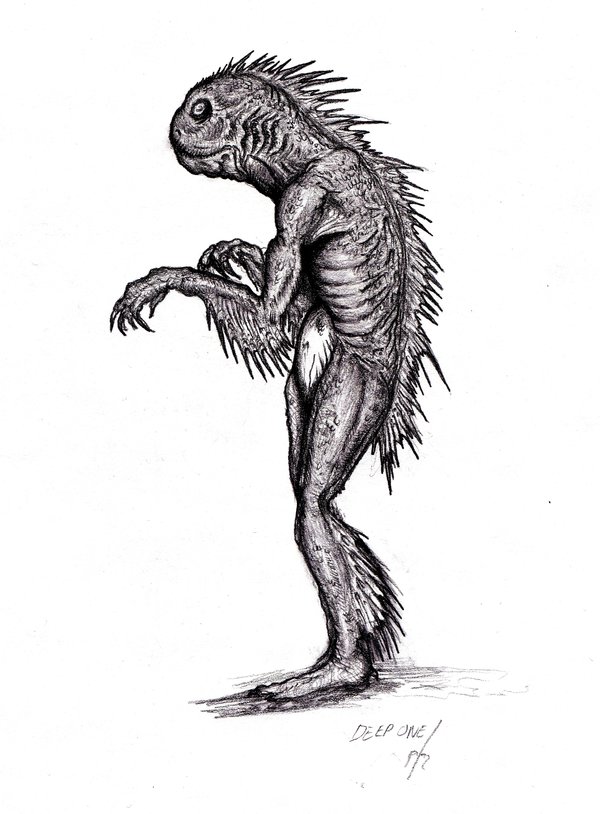